SPOILERS AHEAD
don’t read if you haven’t seen it yet, unless you don’t really give a shit, in that case please read 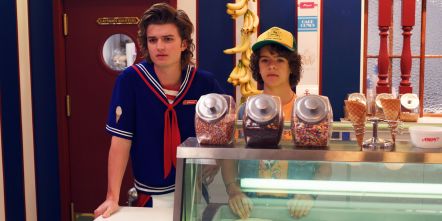 I finished Stranger Things 3 last night.  All morning I’ve been reading what every idiot has to say about it, and now I’m going to do the same.  Overall, I’m very happy with it.  It seems that most people are also happy with it.  There are some criticisms I’ve noticed, some of which I agree with (don’t worry, I’ll get into that), but overall it’s very solid and an improvement over season two.

I think the show’s greatest strength is the performances.  It’s shockingly well cast, and almost everyone brings such a genuine confidence to their roles.  Even its new characters seem extremely comfortable and well-developed alongside characters we’ve known for two seasons.  Maya Hawke’s performance as Robin is particularly strong.  I’ve seen some complaints from people that someone as attractive as Robin would not have been a “marching band geek”, and certainly wouldn’t have gone unnoticed by Steve, but I think this is kind of a regressive observation.  My only real criticism of her story arc is the lesbian reveal towards the end, which honestly feels tacked on.  I’m not saying the show shouldn’t have LGBT themes (don’t start with me), but it really felt like kind of an afterthought.  Almost as if the writers realized after finishing the script that they might get some Twitter backlash for not having any openly gay central characters, so they just threw it in lazily without thoughtful development.  They still could have used that, but perhaps a bit more organically?  Still, her character is a highlight for me. 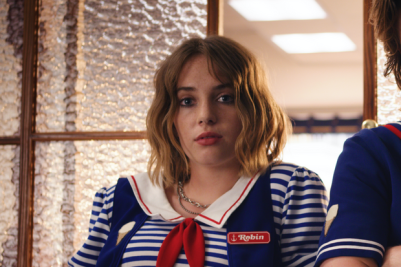 People are writing about this to death, but I agree with a lot of folks in their belief that Steve Harrington is the heart of this show.  Joe Keery’s performance is by far the most nuanced and interesting of all the cast.  The growth of the character is so natural, and it’s largely due to Keery’s performance (and some decent writing).  His scenes with Dustin (Gaten Matarazzo) are undeniably lovable and fun.  Some of their moments are perhaps overly memeable, but their chemistry is genuine.  While I’m on the subject, Matarazzo is also one of the best actors on the show.  He really commits, and is able to weave in and out of various storylines much better than some of the others.  It’s a somewhat “broad” character, but it never really feels like Matarazzo is overacting.  Well done.

I’m going to start to veer into my criticisms now.  I do think the show starts to introduce some interesting themes here.  The early moments with Will feeling alienated from his friends are especially heartfelt.  Not only is he dealing with being the only one in his circle NOT getting action, but he’s also being forced to realize that he’s getting older and things change.  You’re not always going to be playing D&D with your nerd friends in their parents basement.  The depiction of these struggles is very touching, but I feel like they abruptly let it go as soon as Will realizes that the rascally creature is at it again.  They could have taken out of few scenes of Coca-Cola product close-ups and 7-11 fetishization to make more time for these themes.

Which brings me to my next criticism.  Part of the show’s charm is its 80s nostalgia and pop aesthetic.  I like the 80s as much as the next person born in 1989, but the show sometimes feels oppressively precious in this regard.  I’ve realized over the last few years that I don’t like when films/TV use period-specific music to elicit mainstream nostalgia.  When a certain song is used to make people go, “Oh yeah!  Remember this song?  What a great time that was!” blah blah.  To me that’s needlessly heavy handed and distracting.  I’m not saying period-specific music shouldn’t be used, but you need to be clever about it.  Don’t use the OBVIOUS song, play a deeper cut.  The show has actually been successful with this in the past.  In season one, Joy Division’s “Atmosphere” is used instead of the more recognizable, “Love Will Tear Us Apart”.  Also, way too much product placement here.  Much of the story this season revolves around a shopping  mall, so there’s a level of self-awareness about it, but it still gets a bit much at times.

Here is my final (and main) criticism of Stranger Things 3.  Early in the season, there is an incredible scene at the local pool.  Billy (Dacre Montgomery), Max’s brother and an antagonist of the series, is the lifeguard everyone lusts after.  All the sexually frustrated mothers line themselves up on display, ready to make their best impression as the studly curly haired fuckboy arrives for his shift.  It was established last season that Mike’s mom Karen (Cara Buono) has the hots for Billy, and the feeling is mutual.  The tension hits a boiling point when Billy proposes the two of them meet that night for a “swimming lesson”.  Mrs. Wheeler plays a little hard to get, but agrees to the plan.  This is a BEAUTIFUL set up for a cuckolding sequence, but right before Karen is about to leave the house, she sees her dumpy husband asleep on his recliner with their young daughter and has a change of heart.  LAME!  How amazing would it have been if she went through with it?  I know Billy also gets sidetracked by monsters, so it wouldn’t have happened anyway, but God I wish they had let that thing play out.  Imagine: Mrs. Wheeler showing up to the pool to an already naked Billy, legs spread like the Barberini Faun, dong turgid.  He tears off her clothes, they both jump in the pool and fuck passionately.  The camera focuses on their intense lovemaking for several minutes, then cuts to the fence where we see Mr. Wheeler peaking through.  His hands clasping the fence, tears streaming down his face.  After a few seconds we see one of his hands reach down out of view before coming back up holding a video camera, while the other hand reaches down out of view and stays there.  You know where this is going.  A missed opportunity that should have happened, smdh.