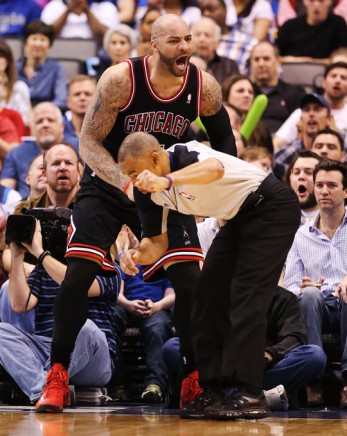 On March 30, 2013, the single greatest moment in the history of sports occurred, and yes, it involves the Chicago Bulls.  During the second quarter of a 100-98 loss to the Dallas Mavericks, the Bulls’ Carlos Boozer accidentally punched referee Dan Crawford in the wiener.  Boozer had just scored on Mavericks star Dirk Nowitzki, and was celebrating with a fist-pump.  Crawford put on a brave face, but as you can see he took a pretty serious hit.  That thing must’ve been flattened.

These are the kind of moments I crave when watching sports.  Most people tend to get excited about the actual game itself, or the skill of the players, but to me those things can’t compare.  They just can’t.  This should not come as a surprise to people who know me.  I’ve never really been a sports guy, so it makes sense for me to obsess over these moments.  It makes me wish these things happened more often.  Who doesn’t want to see Patrick Kane take an occasional puck to the peen?  I’d love to see Clayton Kershaw take a hit to the ol’ family jewels.  Basically, I want all sports to be like a Three Stooges episode.