Talk about the Sunday Scaries

Man oh man. Where did this weekend go, Amiright? Of course I am. Nothing much more terrifying than realizing your weekend is about to be over and you have to go to work the next morning. Well expect for what McKenzie did this morning.

First of all I would like to preface this by saying that it has been 2 1/2 years since both Christine and I have had the opportunity to sleep past 9am. It is very Rare that at least one of us gets to sleep in but for both? Yea right. I woke up this morning feeling like a new man. No headaches, no soreness, Not tired at all. Maybe the first time for that in a long time. But something was off. It was quiet…too quiet. I felt like a solider during the Vietnam War waiting for the McCharlie to ambush us.

My first assumption was that our little McStinker was still asleep. So Christine had the wonderful idea of opening McKenzie’s bedroom door so she slowly wakes up and isn’t a Bear when she does so. I approached her bedroom door and Sllloooowwwwlllyyy opened it. What Do i See? WHAT DO I SEE?

McKenzie was straight up sitting up in her bed. Just STARING at me. (Keep in mind i couldn’t react so this is a recreation.) I was paralyzed with fear, I was taken back. We locked eyes for about 20 seconds and then she waved and whispered in the creepiest voice I’ve ever heard “Hi Dada.” Obliviously I couldn’t get a picture of myself but I imagine it looked something like this. 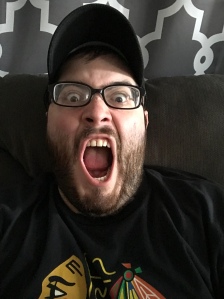 Luckily I had waken up over night to use the bathroom or I would have literally shit my pants. But upon further review McKenzie wasn’t possessed like I originally thought but she was just super tired still. Parents will understand, the not sleeping and the creepy shit kids do. If you don’t then i don’t know what to tell you…Have kids? I don’t know

Talk about the Sunday Scaries