So while i was gone last week Christine had mentioned to me that she began to watch this show call The Act on Hulu. I originally had no interest in this but upon watching the first episode last night I was captivated and extremely disturbed by what I was watching. So i decided to read up on this case, and sure as shit there was an HBO documentary called Mommy Dead and Dearest. So we watched that too.

So basically this is the craziest story that you will ever hear,

So basically DeDe and Gypsy (Her Daughter) are not having a very easy time going through life. They were among the million people who were displaced by Hurricane Katrina, and lost everything. And Gypsy? well Gypsy is suffering from Muscular Dystrophy, Leukemia, Seizures, she can’t eat anything by mouth and needs a feeding tube, and has a Deadly sugar allergy. She has been confined to a wheelchair and the estimation is that she wouldn’t make it past her eighteen birthday. This is a horribly sad story, in fact the only way it would be more sad is if it were true. Yep, that right. The entire list of illnesses that Gypsy had were complete bullshit. There was pretty much nothing truly wrong with her. The term for this is called Munchausen Syndrome.

The wild part? In most cases the suffering person is the one who comes up with their illnesses. This case? It was Gypsy’s own Mother who fabricated this whole story and even had her own daughter believe that she was terminally ill. In fact, that feeding tube that i mentioned before? Her mom wanted that placed, the Sugar Allergy? Complete Bullshit. In fact there is so much mystery around this case that there is legitimately no proof as to which of Gypsy’s illnesses were diagnosed by actual doctors or DeDe herself.

Did this just blow your mind? Are you taken back by the insanity of this? Can you believe that a parent would knowingly put their child through hell for whatever reason (the reason is not important). Well Apparently DeDe is no saint and has a long list of arrests and slip ups that show us that she is not the Mother of the Year candidate but in fact she is an Evil Person. 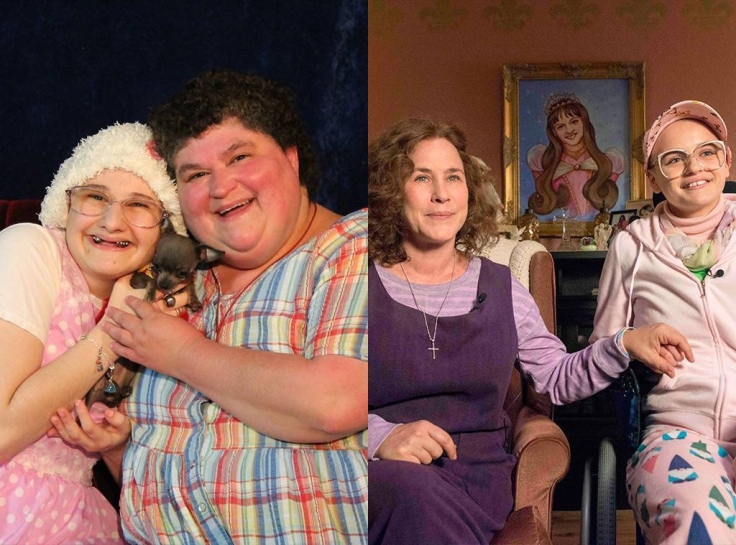 The picture of the left is an actual picture of Dede and Gypsy, and the picture on the right is the portrayal of them from the Hulu Original Show The Act.

**Now if you Plan on watching this show after reading this, you may want to not read this Last part**

Now there are two people on earth who will be able to tell you how much of this Gypsy actually knew, and one of them is dead. Now, lets get to the actual murder. My suspicion is that once Gypsy found out about a large majority of her Mother’s terrible secret that she started to feel resentment towards her mother. I mean she was held back from having a normal life because her mom selfishly took it from her. So when gypsy had the opportunity to have a boyfriend, of course she ended up with a psycho. Like they could have played out this scenario 100 times and she wouldn’t have landed a crazier guy in any of those scenarios. So what happened? Gypsy got sick of her Mother, and told her Boyfriend Nick to kill her…So what did he do? He waited for her to fall asleep and he stabbed her 10 times, leaving her to die in her own bed. The police quickly put two and two together and brought in Gypsy and Nick, due to the fact that they both were missing from the crime scene, and that they posted on Facebook what they just did (Wild Move). Nick is currently serving a life Sentence for the murder of DeDe Blanchard and Gypsy is currently serving a 10 year sentence for Conspiracy to Murder. My opinion is that she should be locked up for you know? Forever but what do I know.

That’s it, you honestly couldn’t make this up if you tried. it feels like the end of a Quentin Taratino movie were everyone is either dead or in Jail. Absolutely wild story, if you want to watch either of the media relating to this case the names of them are below.

What do you think about this? Please leave a comment below and Share with anyone who likes this kind of stuff. Maybe you become the next Rusty Cole…Time is a Flat Circle.