Hockey is pretty much king right now, seeing as we are currently facing the NFL offseason which feels like it is 8 years long. Anyone who has any sort of idea about hockey probably knows the Carolina Hurricanes. But did you know about their new tradition? If you don’t you Gon Learn today because it is awesome. Please see the video below for an example.

Look at that. It is awesome. The best part about it as they have been doing it all season after Home Wins. It is fun, it is fresh, it is a blast to watch. This is the type of thing that brings more fans to the team and more eyes to the game. I mean everyone should agree with that right? WRONG! Of course Hockey Hardo Don Cherry has a problem with it. 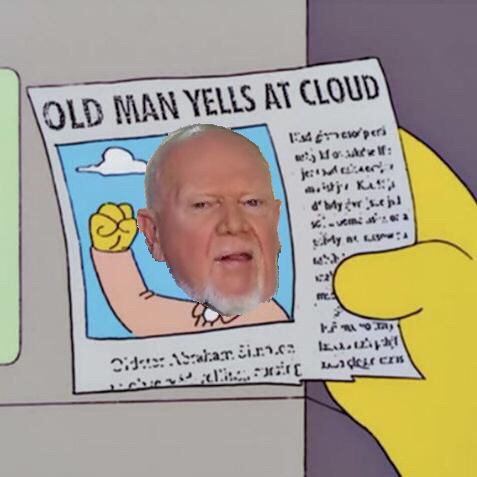 “Old Man Yells at Cloud” moment starts at 4:30… Please note how Don Cherry calls the Carolina Hurricanes celebrating wins and I quote “Ridiculous” while he is wearing a suit that looks like it was made out of T-Shirts that Guy Fieri donated to Goodwill. He should be happy the team is having a good time. You know God Forbid athletes have fun while playing a game. Jerks is what he calls them. Well you would think this is the end of the story right? WRONG AGAIN. The Carolina Hurricanes don’t give a flying fuck what that old man has to say and took to twitter to show it

Look at that. Don Cherry wan’t none of this smoke.

But it gets better. The canes pulled a Drake and went Back to Back on Ol Don, and tweeted this out earlier today.

As it stands right now the Hurricanes are 1 Pt out of the final Wild Card Spot in the Eastern Conference. I hope they make the playoffs, The rest of the league doesn’t want this smoke. I’m 100% buying one of these shirts because I’m a big Hurricanes guy now.